The Back Room presents both Americana and international materials. This inventory is a selection of rare, scarce  and one of a kind materials published in the 18th, 19th and occasionally the 20th century.  The Back Room also includes 19th century American wall maps, an area of special interest.  The Back Room inventory will be updated frequently. 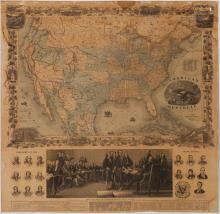 This image rich wall map is an example of pictorial, political and decorative mapmaking. Consisting of two, large joined panels, this wall map functions at several levels. The first is as a detailed, colored map of the continental United States. The second is as a historic and patriotic engraving in the bottom panel  that shows the July 4, 1776 Signing of the Declaration of Independence, alluding to John Trumbull's monumental painting hung in the U.S.

This scarce British Admiralty Chart America's West Coast was prepared from original surveys done in 1855, updated to Sept. 1865 and is finely engraved in black and white, with artful grey tones by E. Radclyffe whose vignettes include numerous views of the coast of California from the southernmost point of Diego Bay northward beyond San Francisco to Cape Mendocino. The varied and dramatic geology and geography of California is presented as it appeared six years after the beginning of the Gold Rush. 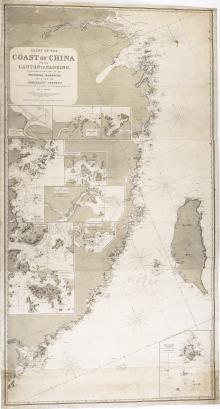 This Admiralty Survey chart describing  in great detail the coast of China and all of the coast of Formosa is a rare 19th century, engraved, two toned nautical chart representing new surveys that build on the original survey work done by Captains Collinson and Kellett, and Sir Edward Belcher R.N. between 1840-1850 that for their time provided western navies with some of the earliest nautical surveys of the east Coast of China. In Collinson and Kellett's 1845 survey, also engraved by Isaac Purdy and published by H. 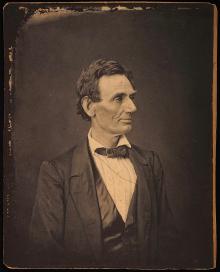 Alexander Hesler (1823 – 1895), the American photographer based in Chicago, Illinois took this photograph of Abraham Lincoln when he was a candidate for President of the United States.   Hesler had Lincoln sit for this portrait in Hesler's Chicago studio in 1860. 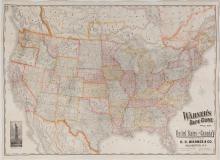 Warner's Safe Cure Prize Map of the United States and Canada is at once a feat of detailed 19th century cartography that in Rand McNally's own words shows a "clearness of outline and beauty of execution" and notably one of the first 19th century maps to show an image of The Statue of Liberty Enlightening the World. 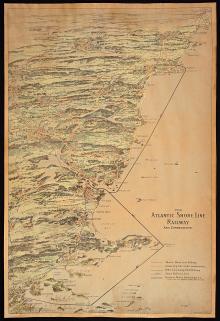 This colorful bird's eye view of the New England coast from Boston Harbor to Portland, Maine shows the various kinds of train and steamship line connections for summer tourists wishing to reach their vacation  destinations in Maine. The map key explains that the transit routes are for the Atlantic Shore Line Railway, a Maine electric street car of sorts, the steam railway line of the B&M R.R. and the Southern Maine Steamship Line with connections to the Atlantic Shore Line Railway.

This exceptionally colorful bird's eye view of Lake Winnipesaukee, New Hampshire was published in 1903 for travelers on the Boston and Maine Railroad who were headed to Lake Winnipesaukee for vacation. Numbers on the map identify specific locations of interest to a traveler and correspond to a key requiring three columns of place names that identifies the area's numerous mountains and islands. The map is double sided. On the reverse are photographs of local sites of interests for the tourist as well as 23 small pages of text.